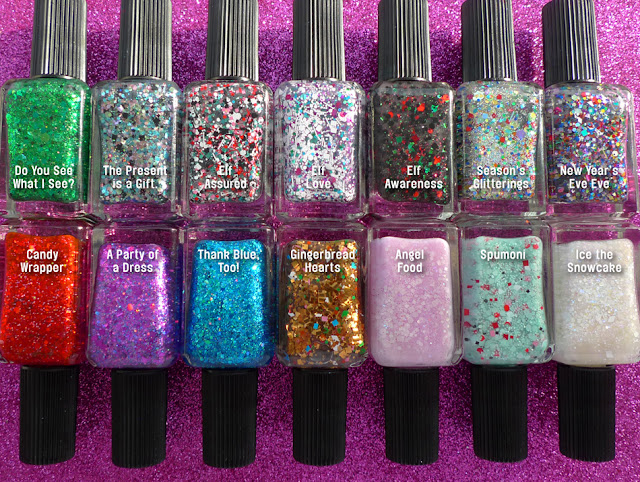 Do You See What I See? is not just a lovely old Christmas song and philosophical question. In this interpretation, it’s emerald green with a sprinkling of small dark green and mammoth holographic hexagons in a clear base.

The Present is a Gift. Might be considered a pastel version of One Nutty Fruitcake except that it has black squares as well as hexagons and diamonds. With lavender, aqua, green and pink glitter, pastel microglitter and rainbow dust. Evocative of the fabulous cocktail dress that is so over-the-top beautiful that one weeps for joy upon finding it. Well, it could happen....

Elf Assured has black, white, pink and almost-neon red matte glitters with metallic and holographic aqua in a white-shimmer base. One of the Holiday Helpers.

Elf Love is another Holiday Helper. Assorted shapes and sizes of white with turquoise, magenta and a touch of lime glitter. Accented with fuchsia microglitter.

Elf Awareness is made with assorted black, red and green glitter in a clear base Also contains red, green and a pinch of sky blue microglitter.

Season’s Glitterings is a technicolor version of ShapeShifter and has mutiple shapes and sizes of silver, gold, green, blue, red, purple and pink holographic glitters. Even with all that going on, it sometimes seems to have an old-fashioned vintage Christmas card colour scheme.

New Year’s Eve Eve is a multiglitter—363 days of glitter. We expected it to have some relationship to The Glittering Crowd, and it does. But the addition of new matte and satin glitters add an extra whallop. Just like 2012.

A Party of a Dress is magenta and pink holographic with an underlining of small royal blue holographic glitter, intense blue-pink shimmer as well as iridescent blue flakes and hexagons.

Thank Blue, too! was given away last Christmas season as a follow-up to Thank Blue! It contains rich cyan metallic and holographic glitters in a clear base.

Gingerbread Hearts contains metallic gingerbread coloured glitter decorated with flat colour red, white, blue, pink and green glitter in a clear base. A portion of the profits from this lacquer will be given to Gingerbread House in Shreveport, Louisiana (http://www.gingerbreadhousecac.org/index.htm).

Spumoni is full of frosty mint and white satin glitters as well as a sprinkle of red, pink and black in a translucent mint base. Sweet.

Ice the Snowcake is blend of satin and matte white glitters, iridescent blue flakes and blue sparks in shimmering pink base.

The new lacquers will be available on eBay over the coming days.
http://stores.ebay.com/lynnderella-lynnderella/_i.html?rt=nc&_sid=1108985868&_sop=10

For more information, please use these friendly links.